For over 35 years, New York City-based artist Alexis Rockman has blended science with informed speculation to deliver a prescient and, at times, apocalyptic vision of the ecological state of the planet. Relying on scientific, as well as historic content, Rockman continues his vision of the challenging collision between civilization and nature in this new body of work, Lost at Sea. Featuring paintings and works on paper, Rockman looks back at the ways in which the world’s waterways have not only transported people and materials, but also culture, religion, disease and plants and animals from region to region. Serving as “highways” for expansionist and colonial exploitation, the history of seafaring tells of a deliberate and unwittingly disastrous ecological and anthropological exchange, which led to a decline of indigenous populations and ecological collapse due to invasive species. He is both fascinated by celebrated and obscure accounts of lost cargo, and is the ideal tour guide to lift up the curtain on stories that blur the boundaries between eyewitness accounts, rumor, tragedy, heroism, humor and mythology.

Selections from this presentation will be included in the forthcoming exhibition, Alexis Rockman: Shipwrecks, organized by Guild Hall and opening summer 2021. 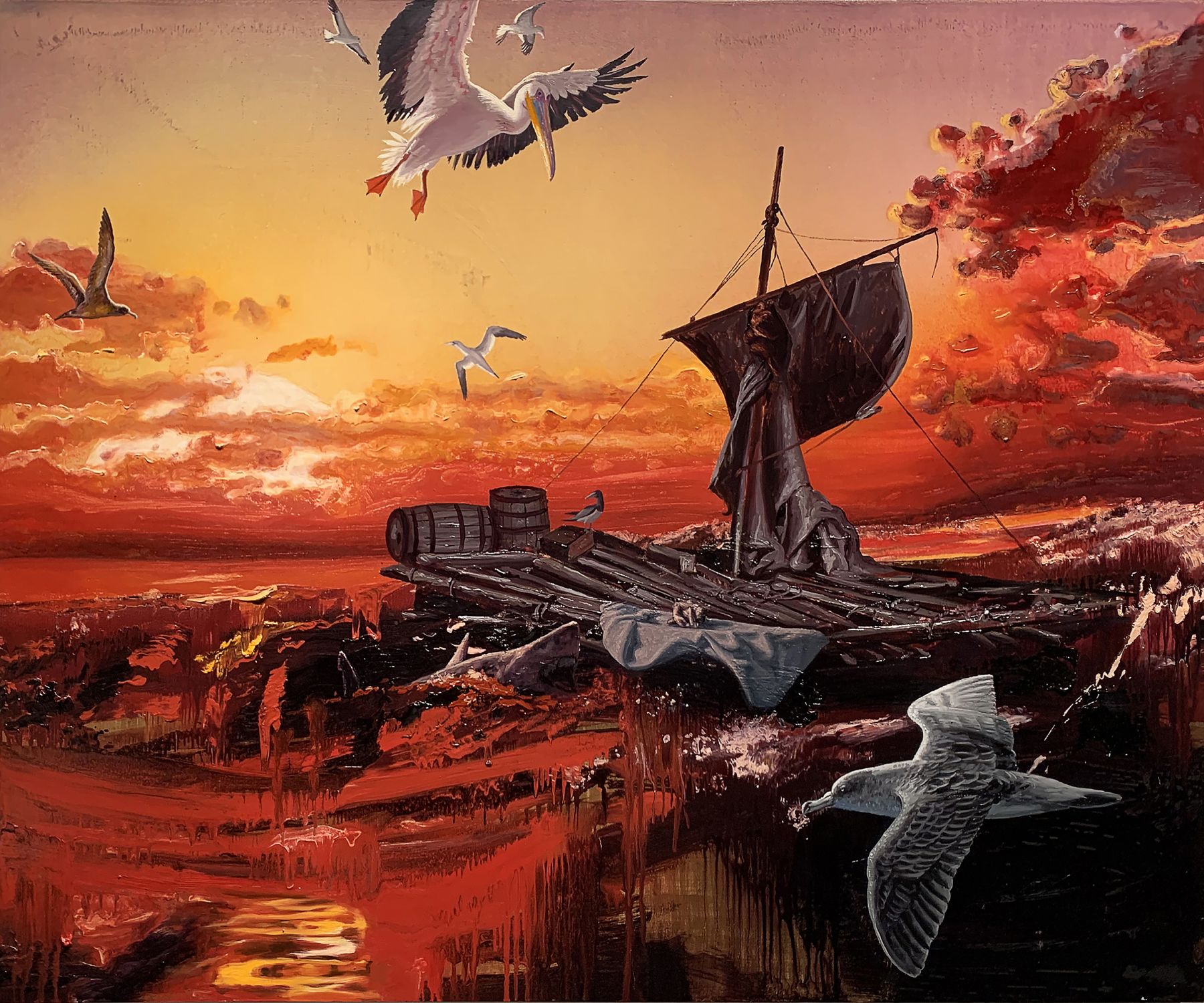 Referencing Géricault’s iconic history painting in the Louvre about the human tragedy, cannibalism, bureaucratic incompetence, class and negligence, The Medusa focuses on the aftermath of the rescue of the survivors off the coast of Senegal. Local sea birds and sharks look for opportunities on the raft before the forces of nature swallow all evidence of the event. 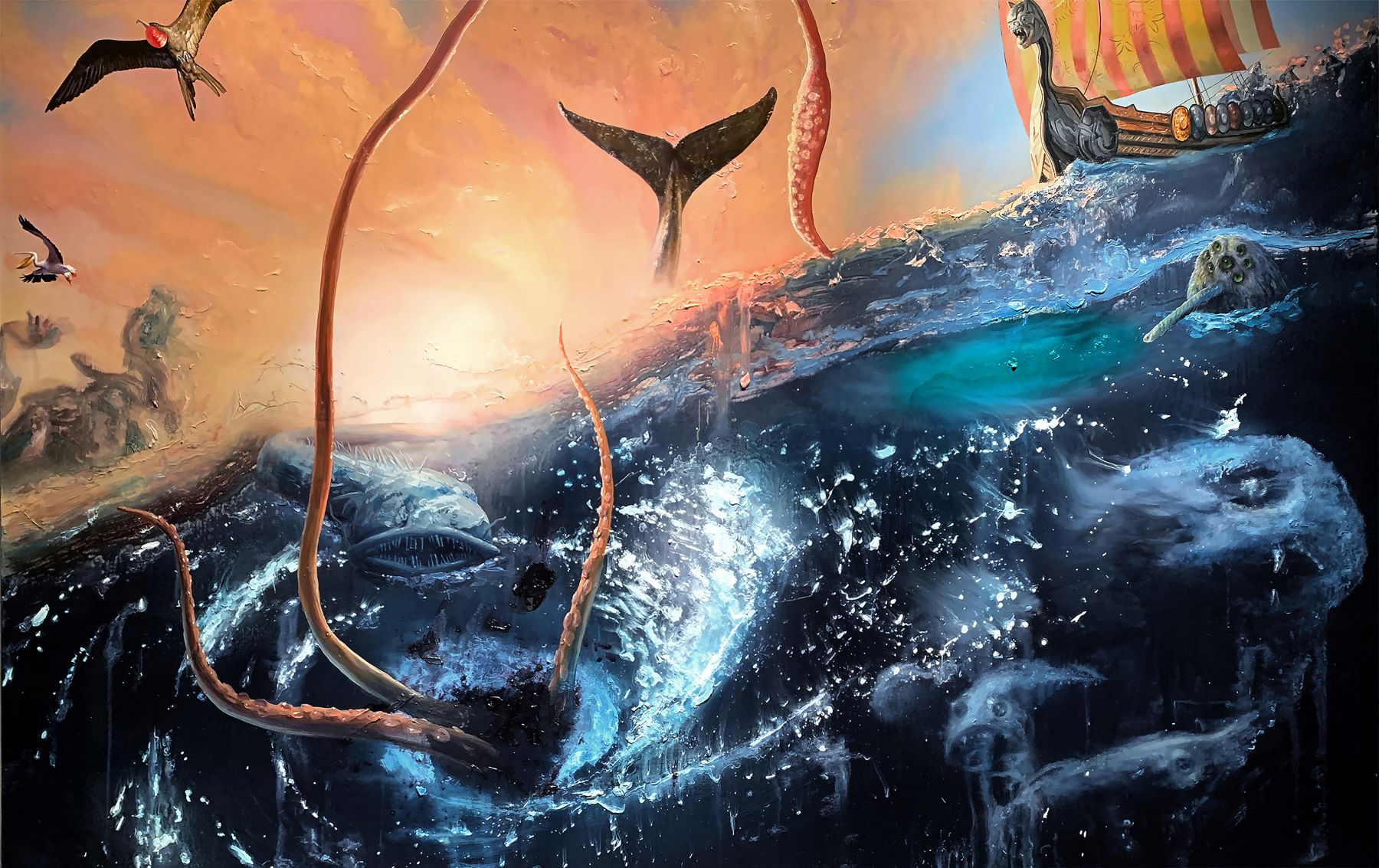 A veritable who’s who of mythology from many cultures, a Viking ship, stuck precariously on an enormous wave, finds itself hurled into the oceanic vortex while a churning cast of characters lies in wait. Perhaps the seabirds will find a successful refuge. 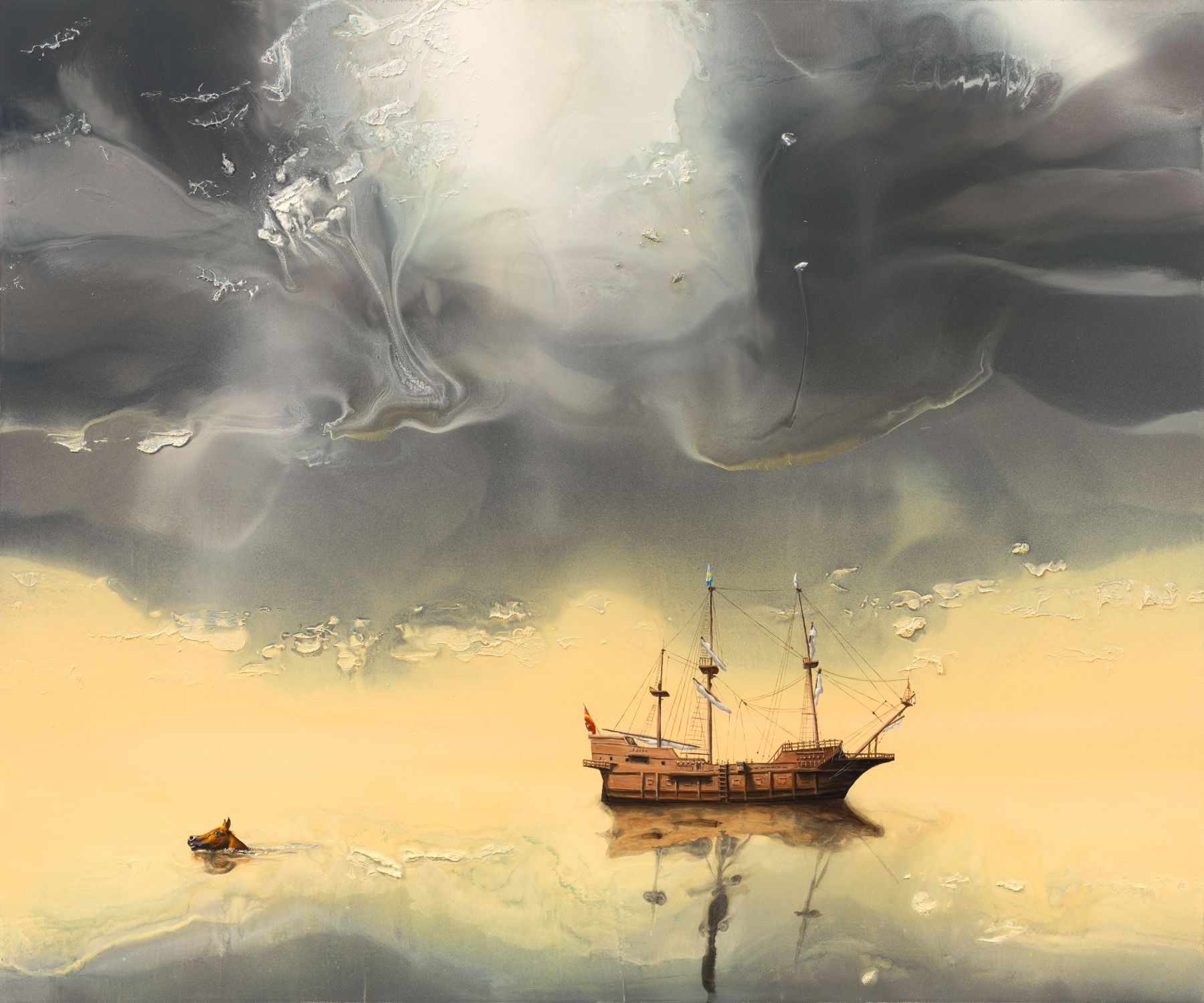 Unable to sail and resupply due to lack of wind, crews often ran out of drinking water. To conserve scarce water, sailors on these ships would sometimes throw the horses they were transporting overboard. Thus, the phrase 'horse latitudes' was born. 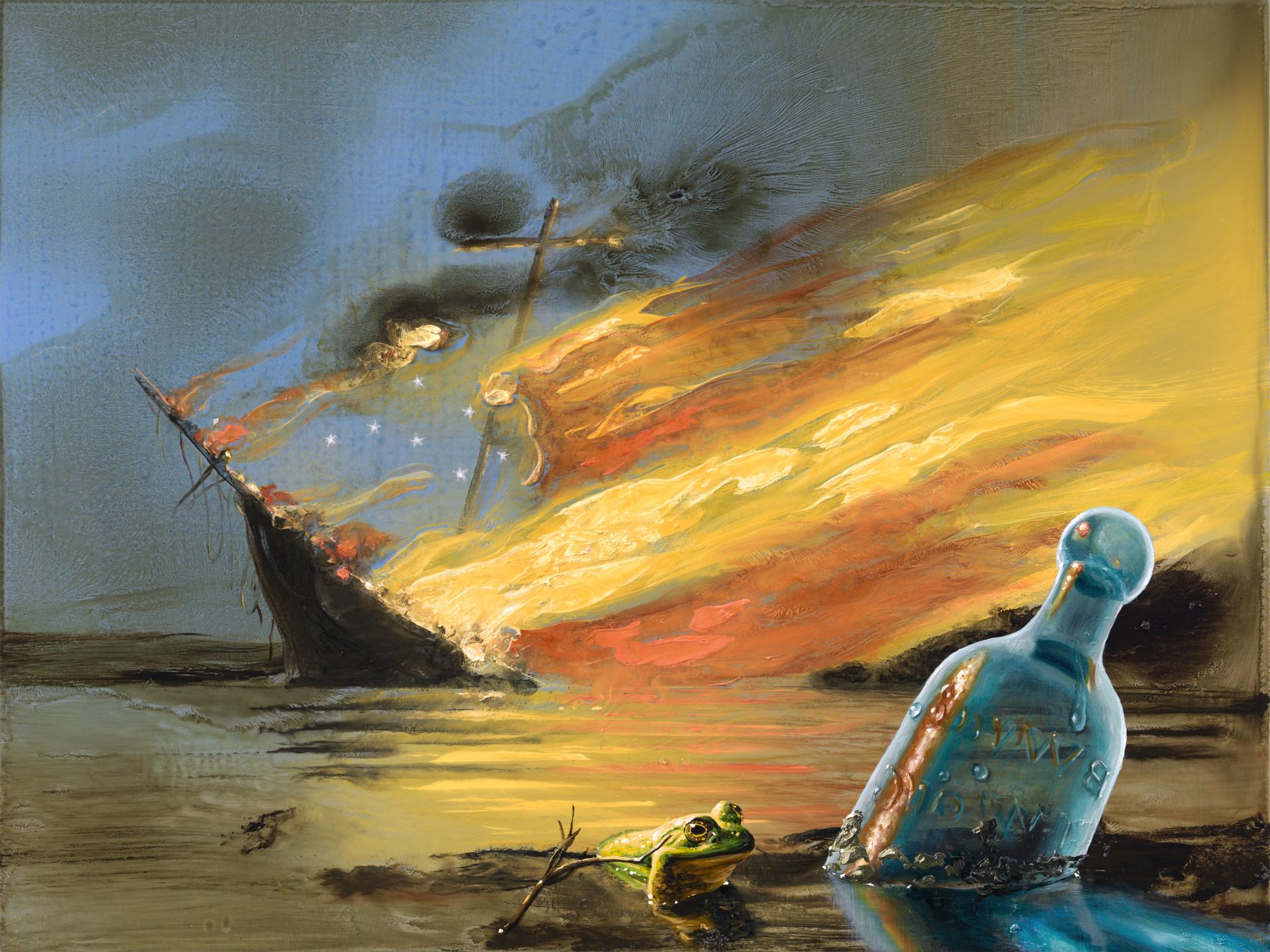 This work is based on a print after paintings by William Baulyn. In a spectacular nocturnal scene, a large warship sinks and burns on a calm sea littered with debris. The flames take on the configuration of the red, white, and blue flag of the Confederacy, the blue field with seven stars being formed by the night sky showing through the flames. Lightning strikes the flag from the upper left, and a bottle used by the Union Army for morphine sits in the foreground. 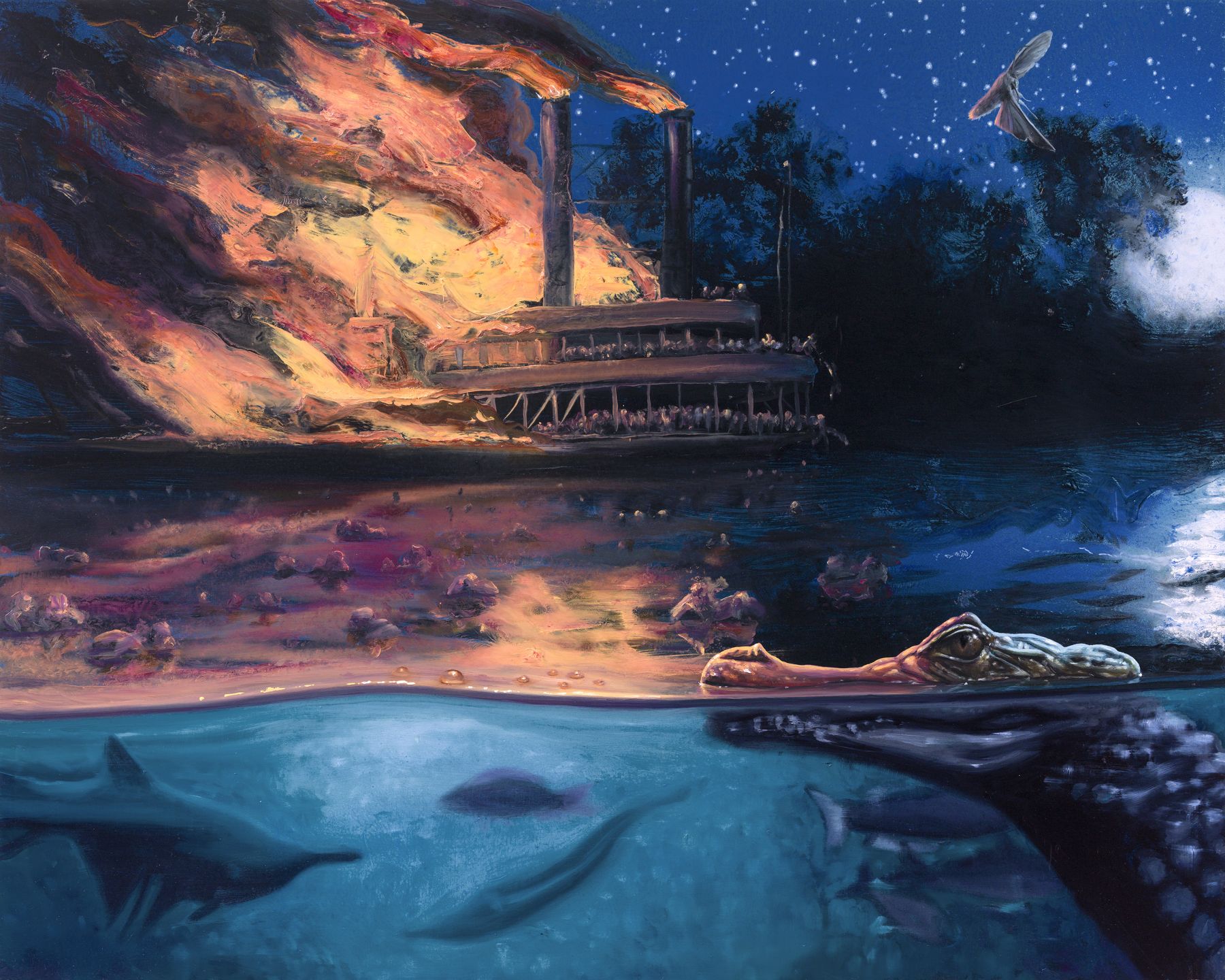 Sultana was a Mississippi River side-wheel steamboat, which exploded on April 27, 1865,on Mississippi River seven miles north of Memphis, Tennessee, in the worst maritime disaster in United States history carrying 1,400 released Union prisoners released from Confederate prisons. There were 1,168 casualties. Here we see it from the perspective of the wildlife 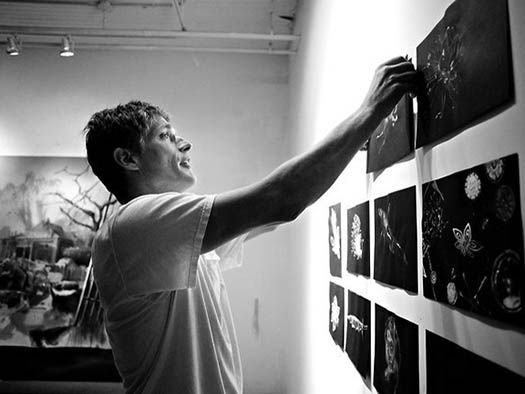 Born in 1962 in New York, where he lives and works, Alexis Rockman has depicted a darkly surreal vision of the collision between civilization and nature – often apocalyptic scenarios on a monumental scale – for over three decades. Notable solo museum exhibitions include “Alexis Rockman: Manifest Destiny” at the Brooklyn Museum (2004), which traveled to several institutions including the Wexner Center for the Arts (2004) and the Rhode Island School of Design (2005). In 2010, the Smithsonian American Art Museum organized “Alexis Rockman: A Fable for Tomorrow,” a major touring survey of his paintings and works on paper. Concurrent with Rockman’s 2013 exhibition at Sperone Westwater, the Drawing Center mounted “Drawings from Life of Pi,” featuring the artist’s collaboration with Ang Lee on the award-winning film “Life of Pi.” His series of 76 New Mexico Field Drawings was included in “Future Shock” at SITE Santa Fe (2017-18). “Alexis Rockman: The Great Lakes Cycle,” a major touring exhibition of large-scale paintings and watercolors, as well as field drawings, of the Great Lakes opened at the Grand Rapids Art Museum (2018) and traveled to the Chicago Cultural Center (2018), the Museum of Contemporary Art Cleveland (2018-19), Haggerty Museum of Art at Marquette University (2019), and Weisman Art Museum (2019-20). It will travel to the Flint Institute of Arts in May 2020. Rockman’s work is represented in many museum collections, including the Baltimore Museum of Art; Brooklyn Museum; Grand Rapids Art Museum; Los Angeles County Museum of Art; Museum of Fine Arts, Boston; New Orleans Museum of Art; San Francisco Museum of Modern Art; Smithsonian American Art Museum; Solomon R. Guggenheim Museum; and Whitney Museum of American Art. For more Information, please visit his artist page.