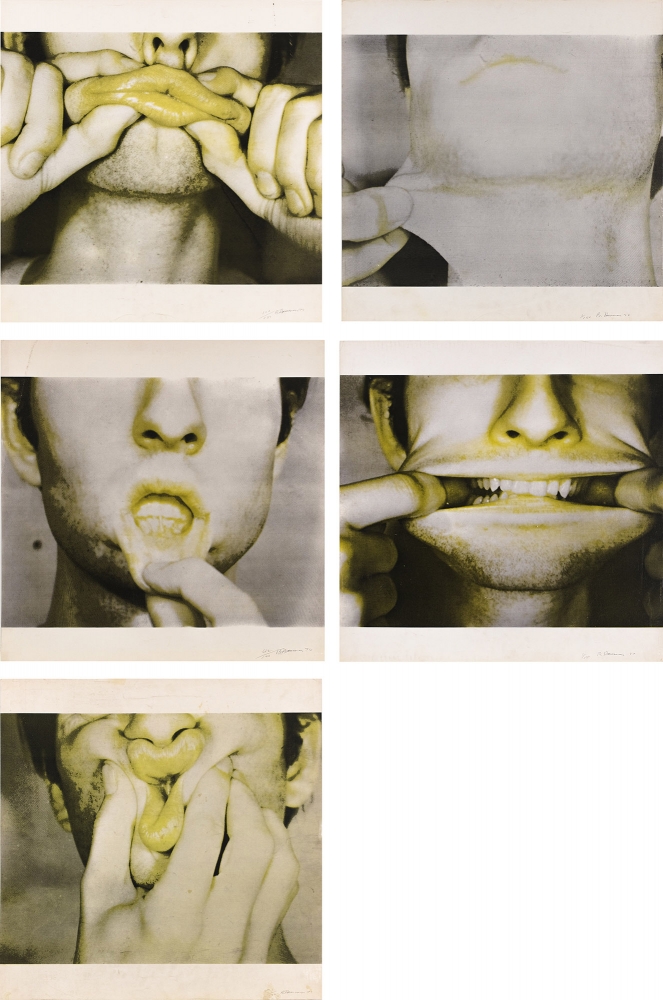 Concurrent with Frieze Masters, Tate Modern is presenting a Bruce Nauman survey, the first in London in more than 20 years exploring the breadth of his work. The solo includes more than 40 works, exploring the distinctive themes that have preoccupied Nauman during his remarkable 50-year career. The opening room presents visitors with MAPPING THE STUDIO II with color shift, flip, flop & flip/flop (Fat Chance John Cage) (2001), a major moving-image installation that embodies Nauman’s radical re-examination of the rarefied space of the artist’s studio. A selection of early and iconic artworks such as Henry Moore Bound to Fail (1967/70) and A Cast of the Space Under My Chair (1965-68) highlights Nauman’s conceptual and often performative approach towards sculpture, the body and studio practice. Other major works include Good Boy Bad Boy (1985), Double Steel Cage Piece (1974), Anthro/Socio (Rinde Spinning) (1992) and Clown Torture (1987) and highlight Nauman’s distinctive preoccupations and how he incessantly revisits them – yet never repeats himself. 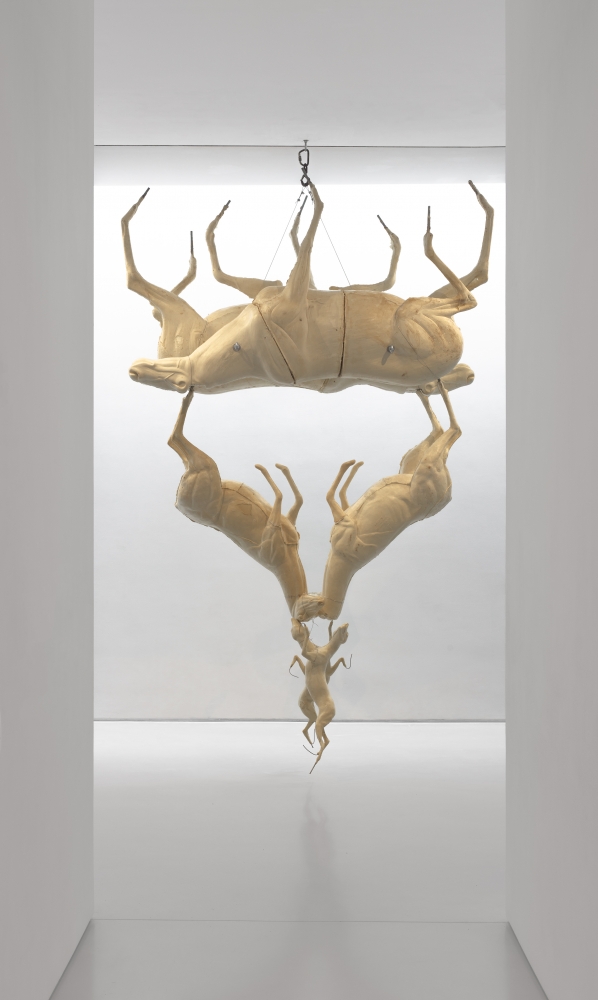 Sperone Westwater has on view now a Bruce Nauman show of three new unique works: two video installations, Nature Morte (2020) and Walking a Line (2019), and one large-scale sculpture, Two Leaping Foxes (2018). For Nature Morte, Nauman recorded hundreds of images documenting all parts of the studio which viewers are able to explore using an iPad. By simply touching and dragging their finger on the screen, participants can scrutinize and examine every corner and object of the studio revealing notes from previous artworks, books, coffee cups, vinyl records, tools, etc. In the 3D video Walking a Line (requiring 3D glasses), Nauman extends his arms out to the side and places one bare foot carefully in front of the other, proceeding in a straight line. In the editing, his body is divided in half, creating asymmetry with each turn-- sometimes his lower body turns around, revolving 180 degrees before the upper half catches up, sometimes completely walking out of the frame. Two Leaping Foxes is an inverted pyramid of animal sculptures made of the same polyurethane foam used in taxidermy. Each form is strange and mutated— although they are not real animals, the eye recognizes them as caribou, deer, and foxes. 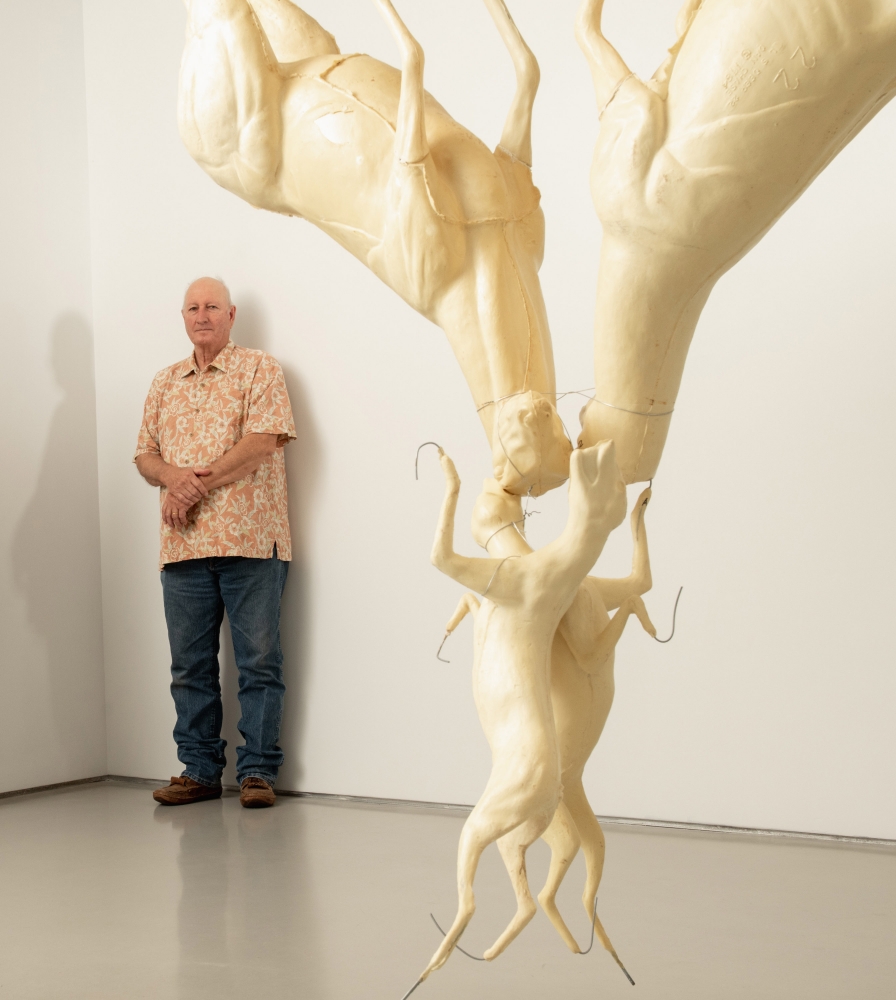 Born in Fort Wayne, Indiana in 1941, Bruce Nauman received his BS from the University of Wisconsin, Madison (1964) and his MFA from the University of California, Davis (1966). Nauman is widely regarded as among the most important living American artists and as a catalyst for the shift in international artistic practice toward conceptual and performative uses of language and the body. Since his first solo gallery show in 1966, Nauman has been the subject of many notable museum exhibitions, including a survey organized by the Los Angeles County Museum of Art and the Whitney Museum of American Art (1972-73) and a survey at the Whitechapel Art Gallery, London in collaboration with the Kunsthalle Basel and the Musée d’Art Moderne de la Ville de Paris (1986-87). A major retrospective, co-organized by The Walker Art Center and the Hirshhorn Museum, opened at the Museo Nacional Centro de Arte Reina Sofia, Madrid, and travelled to the Museum of Contemporary Art, Los Angeles; The Museum of Modern Art, New York; and Kunsthaus Zurich (1993-95). Other important solo exhibitions include “Raw Materials,” commissioned for Tate Modern’s Turbine Hall (2004); “A Rose Has No Teeth: Bruce Nauman in the 1960s” at the Berkeley Art Museum, Castello di Rivoli, and Menil Collection (2007-08); and “Bruce Nauman” at the Fondation Cartier (2015). “Bruce Nauman: Disappearing Acts,” a comprehensive retrospective, debuted at Schaulager, Basel (2018) and traveled to The Museum of Modern Art, New York and MoMA P.S.1 (2018-19). Beginning 7 October, Tate will host a survey which runs through February 2021 before it travels to the Stedelijk Museum, Amsterdam and Pirelli HangarBicocca, Milan. Nauman received the Wolf Foundation Prize in Arts in 1993, the Wexner Prize in 1994, the Golden Lion at the 48th Venice Biennale in 1999, and the Praemium Imperiale in 2004 in Japan. Nauman represented the United States at the 2009 Venice Biennale; the pavilion was awarded the Golden Lion for Best National Participation. Nauman was the 2014 laureate of the Austrian Frederick Kiesler Prize. Since his first exhibition at Sperone Westwater in 1976, Nauman has exhibited regularly at the gallery (1982, 1984, 1988, 1989, 1990, 1996, 2002, 2008, 2010, 2013, 2016 and 2020).