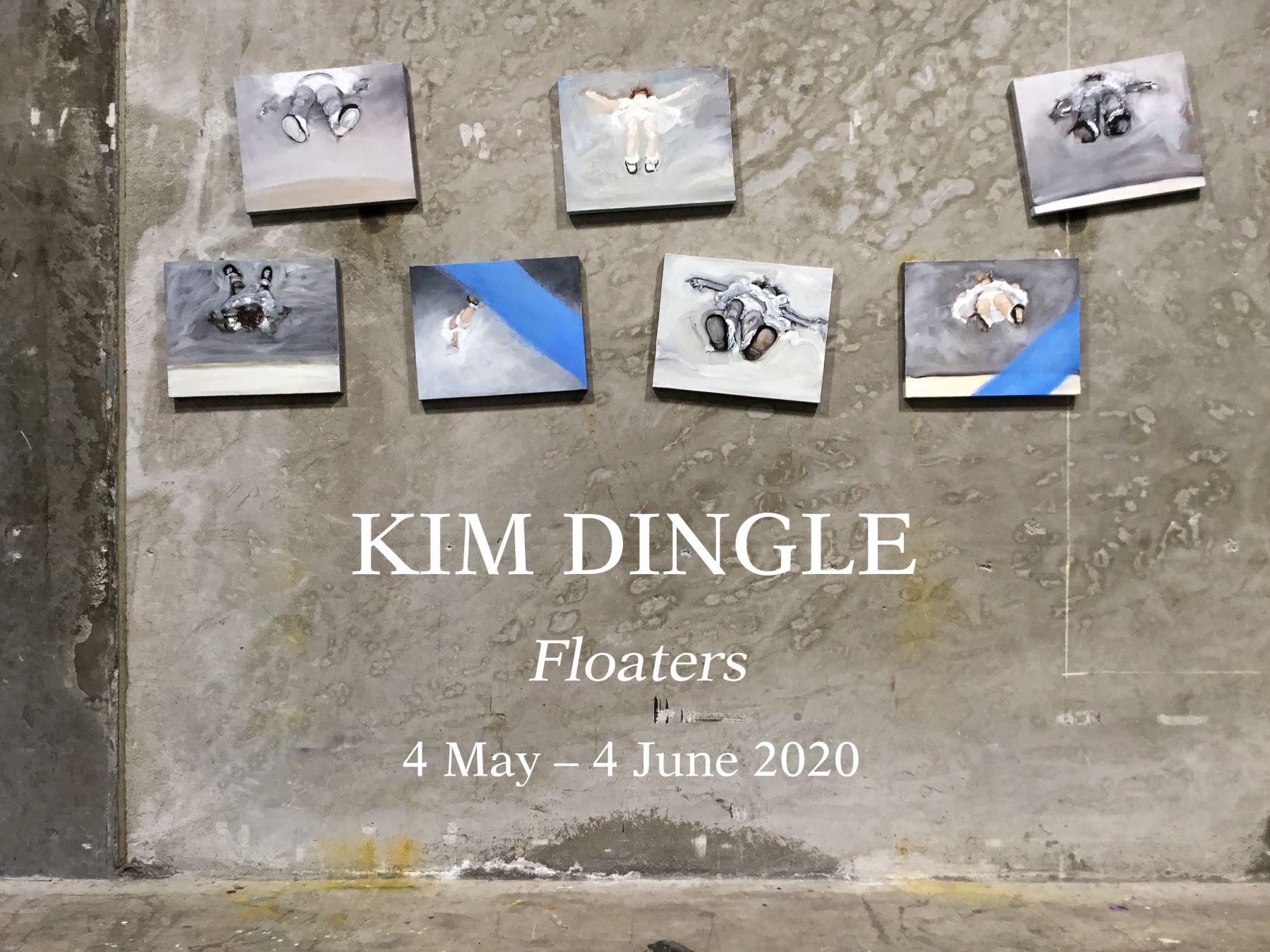 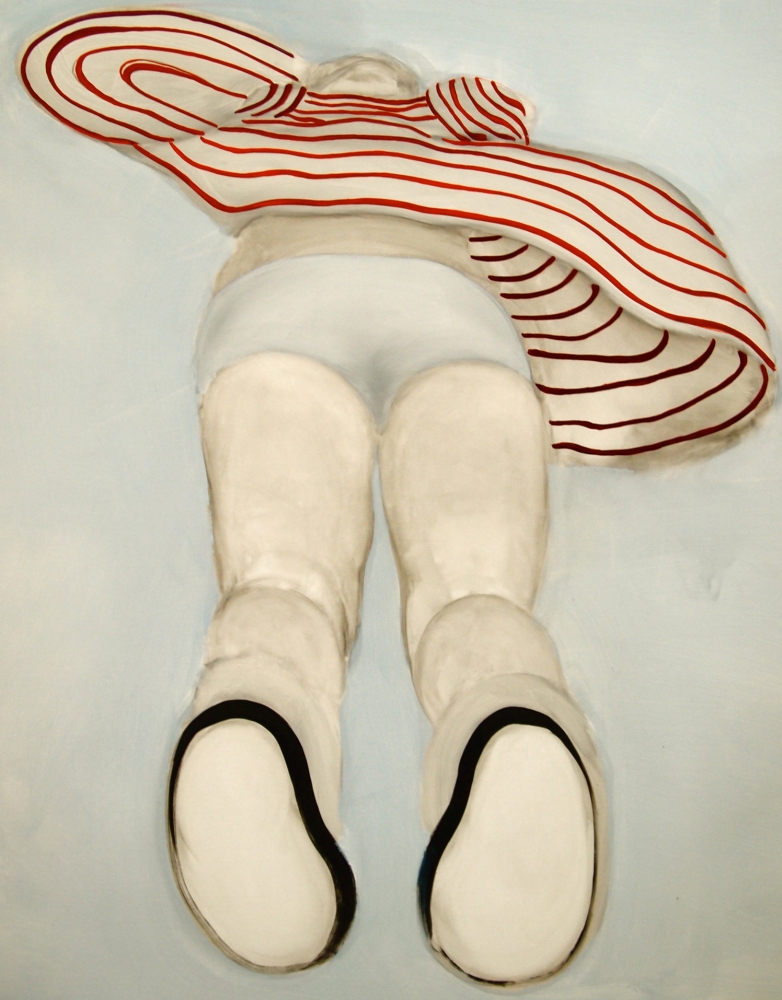 Sperone Westwater is pleased to present "Kim Dingle: Floaters," an online viewing room featuring new works from 2009. Inspired by a trip inside a sensory deprivation tank, the Floaters series was made during a time of intense stress and anxiety for the artist. Reflecting on this period in her life, Dingle recalls:

"One day in Hollywood, a long time ago, a friend and I visited some place in a strip mall where we paid a fee for each of us to be put into a coffin-sized blackened box full of water and no light. The lid was closed and there was utter silence. It was called a samadhi tank. I’m not sure if there was oxygen in there but for a half an hour I waited for something to happen. Nothing happened.... not for me, anyway.

Altering my consciousness, seeking serenity and meditative escape from stress came to me while imagining that I was floating on clouds, weightless and extremely comfortable. These 'Floaters' as I call them were painted in the backroom of a successful restaurant which I had unfortunately opened in the middle of my studio and was managing as the dishwasher and director of wine.”

The resulting paintings reflect this period of self-isolation and meditative escape. The artist’s usual protagonists (chubby, white-frocked, mischievous little girls), previously gripped by mindless conflict and inexplicable anxiety, now feel weightless. With her signature gestural brushwork, Dingle creates a gentle sense of gravity that keeps the figure buoyant over ground. Each girl is painted in a moment of pause, immersed in the ambiguous space of a calming palette with evocative grays and calming blues.

In the broader context of Dingle’s practice, the Floaters series offers respite to the stresses of life, not only for the artist but also her girl protagonists. Often depicting little girls in stereotypically gendered attire, Dingle’s work first attracted widespread critical attention for its frank treatment of the occasionally monstrous psychological states associated with childhood. While the Floaters series gives relief to the subject’s anxieties, Dingles other series depict the little girl in absurd yet psychologically plausible scenarios. Selections from her "Studies for Lemon Tart" series provide further context to these scenes of frenzy and chaos. Summoning the violence implicit in the popular mythology of American childhood, the image of the misbehaving child has remained the linchpin of Dingle’s practice. In fact, Dingle’s exploration of the subject has been so exhaustive that she recently exclaimed that she could paint these works blindfolded. And so she did, relying on muscle memory and intuition, often filming herself in the process. The resulting works are looser, highly gestural and graphic, yet cohere into instinctively familiar form. In each a scaffolding of black is overlaid haphazardly with ghostly white and pale color. They retain the stereotypical trappings of American childhood: dogs, toys, and friends. 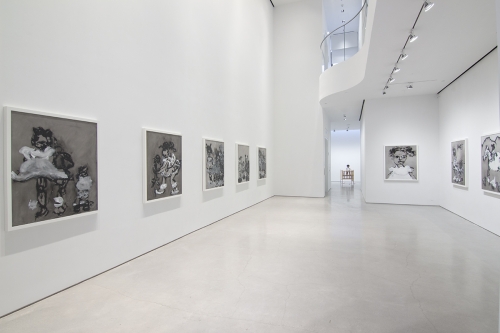 Born in 1951 in Pomona, California, Kim Dingle lives and works in Los Angeles. She earned a Bachelor of Fine Arts from California State University, Los Angeles (1988) and a Master of Fine Arts from Claremont Graduate School (1990). Dingle was included in the 2000 Whitney Biennial, and her work appeared in the major group exhibition “Sunshine and Noir: Art in L.A., 1960-1997,” at the Louisiana Museum of Modern Art, Humlebaek (1997), which traveled to several institutions in Europe and the United States. In 2000, Dingle took an unintentional hiatus from painting when she opened a restaurant in the middle of her studio called Fatty’s & Co., a successful vegetarian restaurant in Los Angeles, which she sold in 2013. Recently, she opened a Wine Bar for Children at Coagula Curatorial, Los Angeles (2013-2014) (and was never arrested), and had a solo exhibition at Susanne Vielmetter Los Angeles Projects (2017). Among public collections owning her work are the Denver Museum of Contemporary Art; Los Angeles County Museum of Art; Museum of Contemporary Art, Los Angeles; Museum of Contemporary Art, San Diego; National Gallery of Art, Washington D.C.; San Francisco Museum of Modern Art; Seattle Museum of Contemporary Art; Smithsonian American Art Museum, Washington D.C; and the Whitney Museum of American Art, New York. Dingle had her first solo show at Sperone Westwater in 1998 and subsequent exhibitions in 2000, 2007, 2012, and 2018.