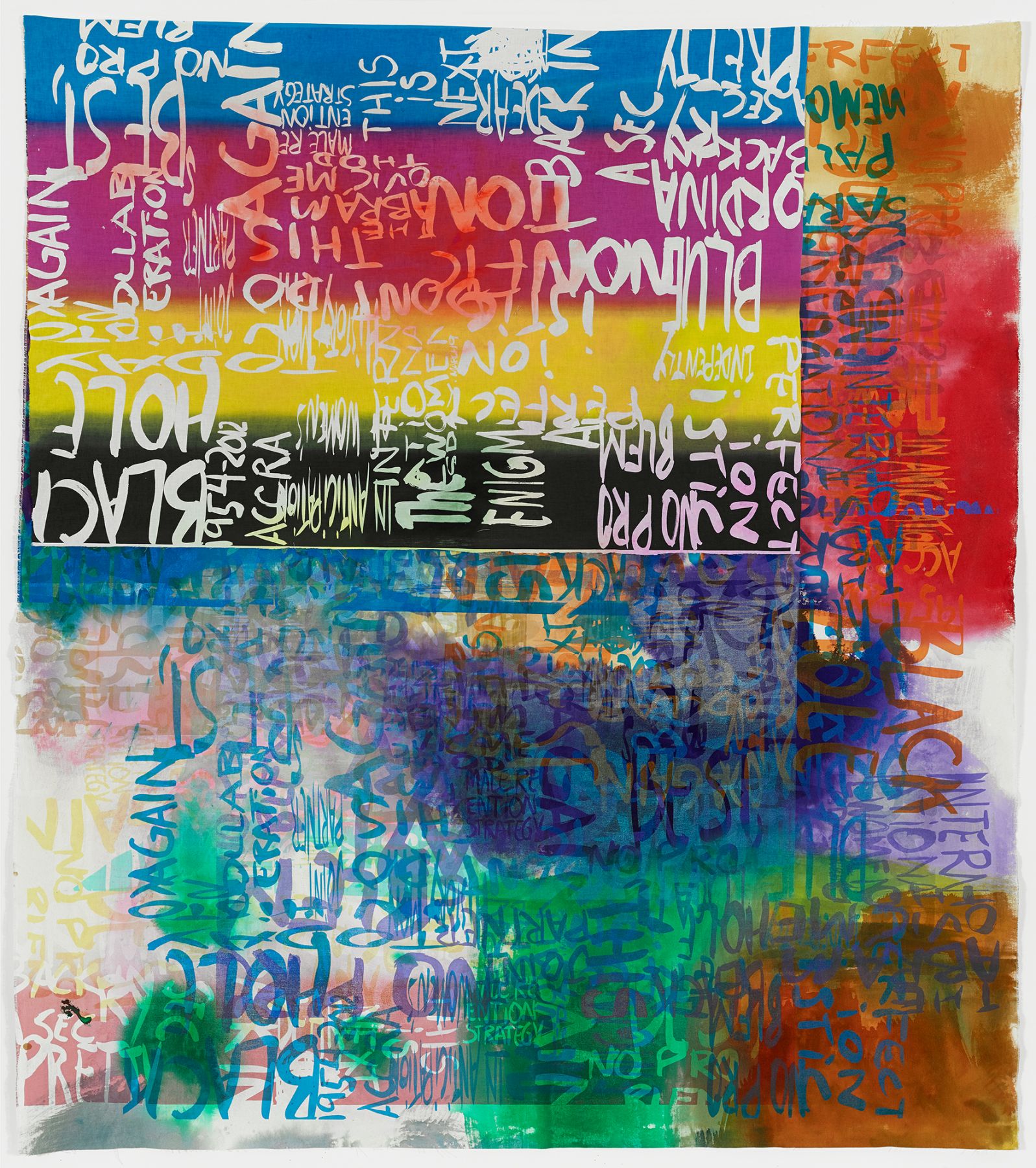 Sperone Westwater is pleased to showcase an online presentation of recent work by Rochelle Feinstein.

Feinstein is constantly on the lookout for what she calls “a good problem to work with,” and her work embodies this sense of alertness. Possibilities present themselves in the course of everyday life, with motifs and headlines drawn from daily newspapers, truisms and enigmatic phrases drawn from conversations and advertisements. Like snags in the fabric of the everyday, these minor details and incidents come to register issues much larger in scale and scope. The Research Park Project emerged from one collection of these vernacular indices. Made at Graphicstudio in Tampa, Research Park Project: Ff combines multiple polychromatic printings of positive and negative text, screened and sewn onto a richly saturated painting. Densely layered, the resulting works create impenetrable fields of excessively Baroque noise.

Since her most recent New York gallery exhibition in April 2017, Feinstein has completed a prestigious fellowship at the American Academy in Rome (2017-2018) and mounted institutional exhibitions at Kunsthaus Baselland (2018) and the Bronx Museum of the Arts (2018-2019). This online presentation includes work from these exhibitions and focuses on a group of works utilizing the rainbow as motif, device, and rubric.

To inaugurate this online presentation, Art in America Editor William S. Smith spoke with Feinstein about her recent work, color therapy, and the language of abstraction. Watch their Zoom conversation here. 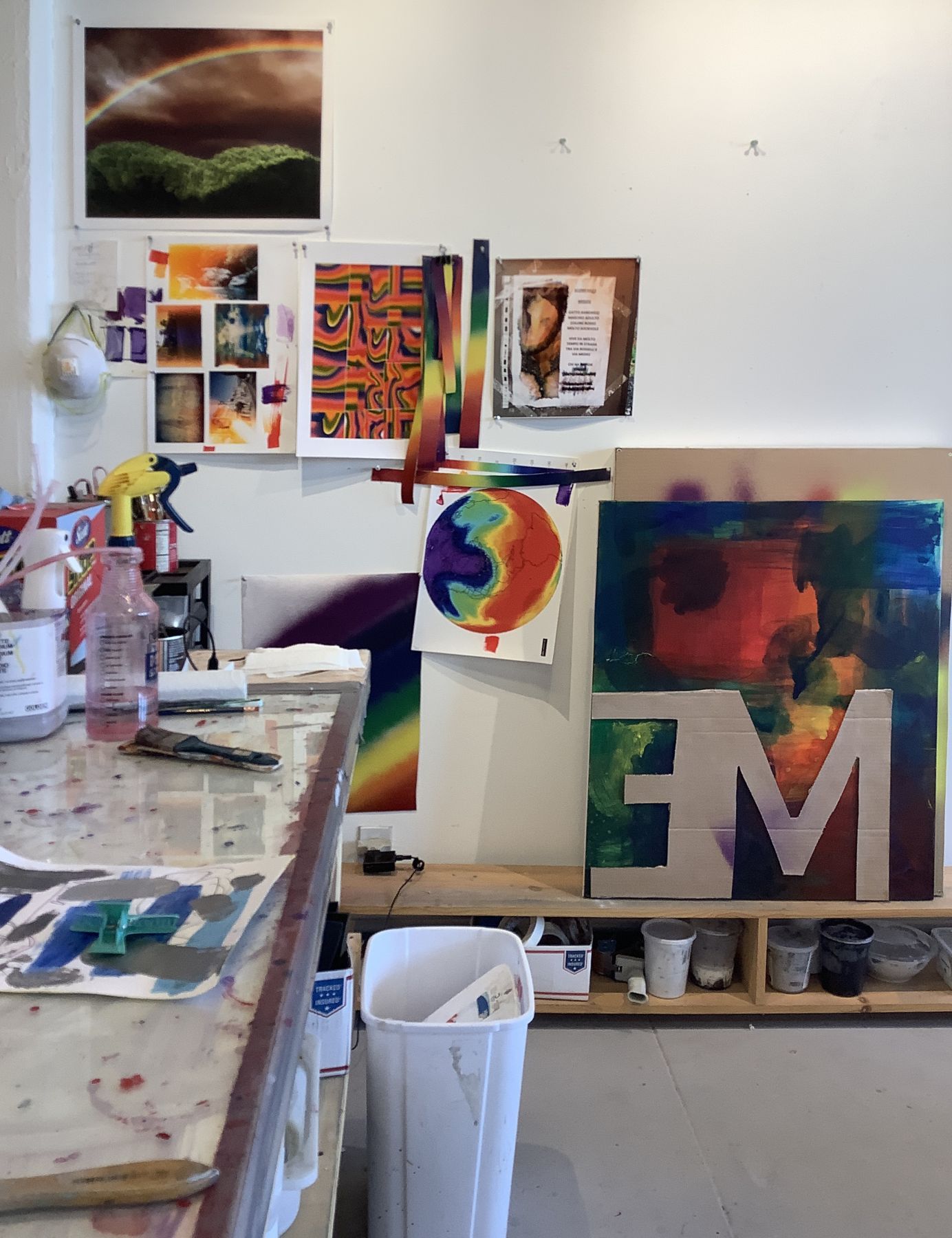 While a fellow at the American Academy in Rome, Feinstein photographed a spectacular double rainbow arcing over the city. She found a “good problem” in the rainbow: its popularity and capacity for overlapping meanings; its digital employment in weather mapping, medical charts and so on. The aptly titled digitally altered photographs, Richard of York Gave Battle in Vain, use one of several mnemonics for the prismatic colors of the rainbow (Red, Orange, Yellow, Green, Blue, Indigo, Violet). These images propose the aspirational rainbow as a tenuous metaphor for the present while simultaneously generating new forms for painting. 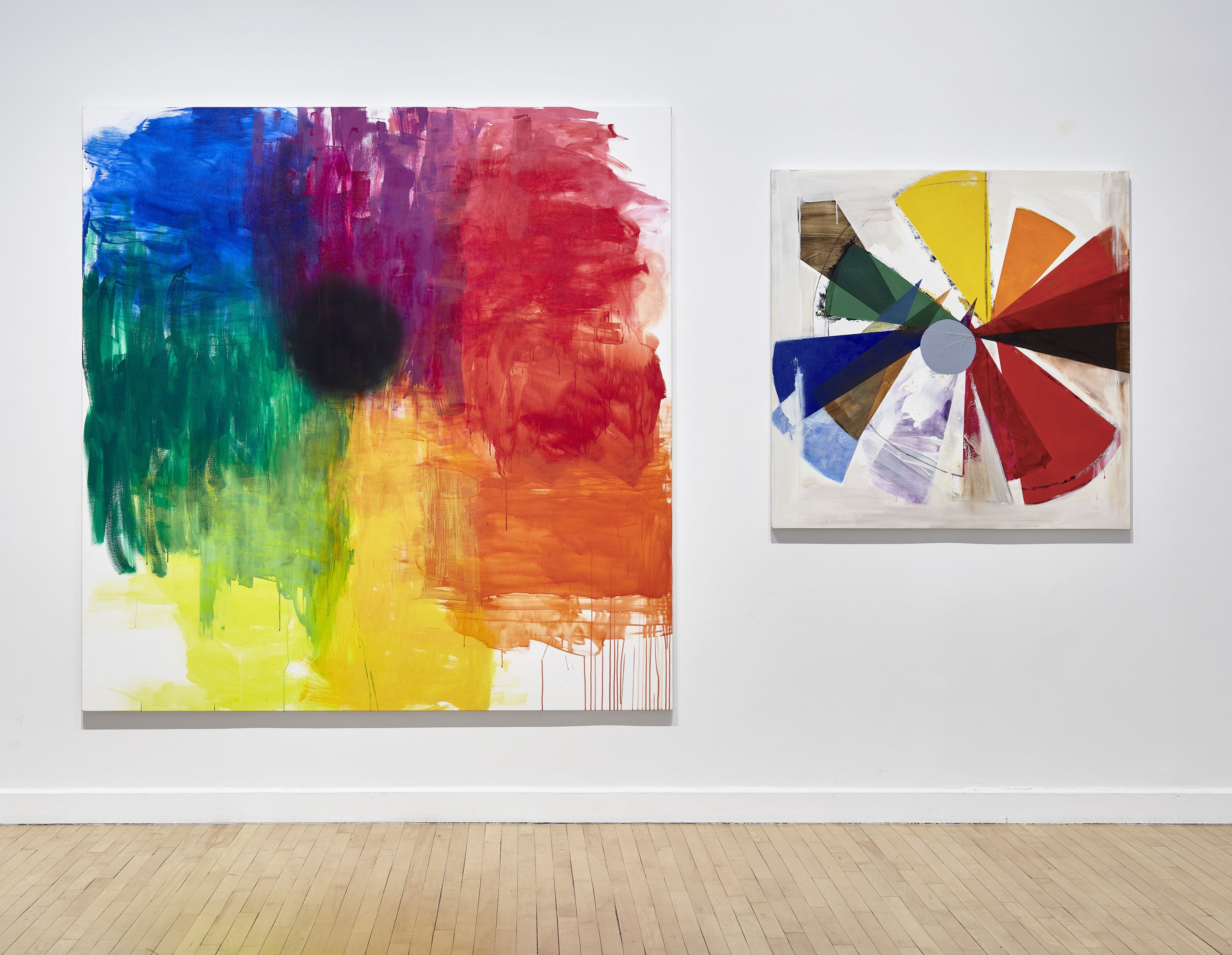 "I think of all the projects as chronicles that I undertake in equal parts as a citizen and as an artist; listening and looking for elements needing comprehension; drawn from politics, personal entanglements, economic downturns, and the commonplace. As a painter, form anchors my work as a tool, a rule, and a convention. Color Therapy takes its cue from this commonly used ‘alt-healing’ umbrella term lacking in specific meanings while conferring expectations. Color, while intrinsic to my practice as a painter, is equally experienced as condition of identity and social organization." 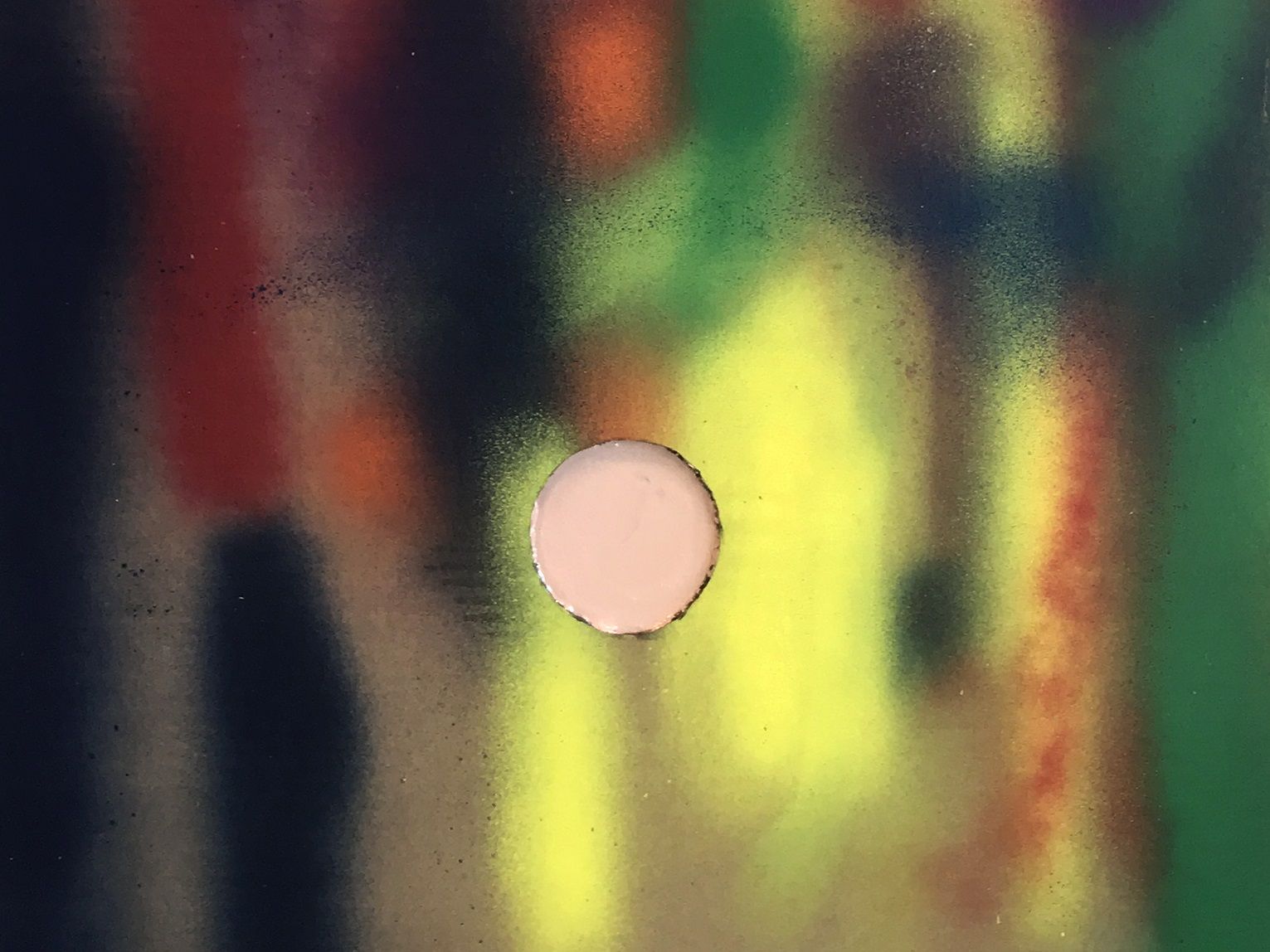 An ongoing series of Fulfillment Center works, two of which were included in Feinstein’s 2018 exhibition at the Kunsthaus Baselland, take their name from Amazon warehouses, insinuating a sensuous quality at odds with its corporate nomenclature. Feinstein observes: “The term Fulfillment Center is intentional corporate language, yet like other enigmatic phrases I work with. So, what does Fulfillment mean for me? Certainly it evokes a feeling unrelated to cardboard, and a Center needn’t be in the center. I think of it as a hole, bodily; a cavity or receptacle, an invitation or a dare.” Fashioned from drab cardboard—a material “that has the potential to be anything, while still remaining cardboard”—these paintings conceal all but a single patch of lush powder-pink paint under a coating of resin, conjuring up desire by means of two-day Prime shipping. Where the first two works suggest the fugitive blues and greens of plein-air studies, the latest work in the series explodes in the colors of the rainbow. 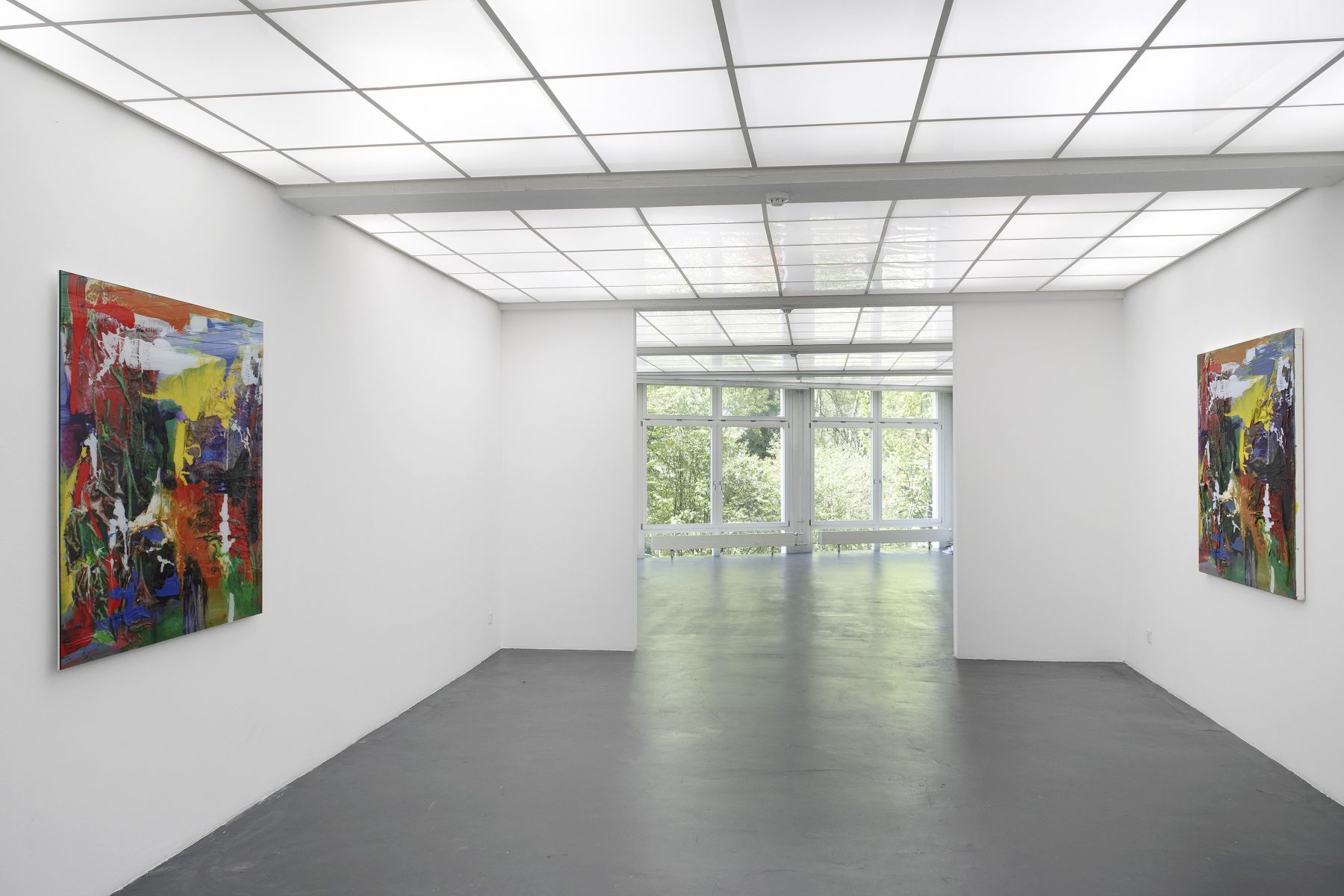 Feinstein identifies a related group of works, idiomatically titled Who Cares, as the “driving force” behind her recent work. These show the progression of an image through varying states of facture, raising questions about the continuing relevance of terms such as original and copy, and where these might fall in relation to one another. The first work in this series, a richly textured painting from 2016, “had a lot of surface,” a lot of paint deliberately worked up to look like the epitome of an abstract painting. In its second iteration, the painting was photographed to scale in high resolution, reproduced digitally, and mounted on Plexiglas which has exactly the same profile as the painting, making it an uncanny simulacrum. The third work, a grayscale version, translates the painting’s image into halftones, a long outdated method of reproducing images in print. Who Cares, in this third iteration, represents “old news,” like painting's version of “old media." In these and other works, Feinstein asks compelling questions about how meaning accrues with a characteristically light touch.

Click any of the works below to view additional images and details. 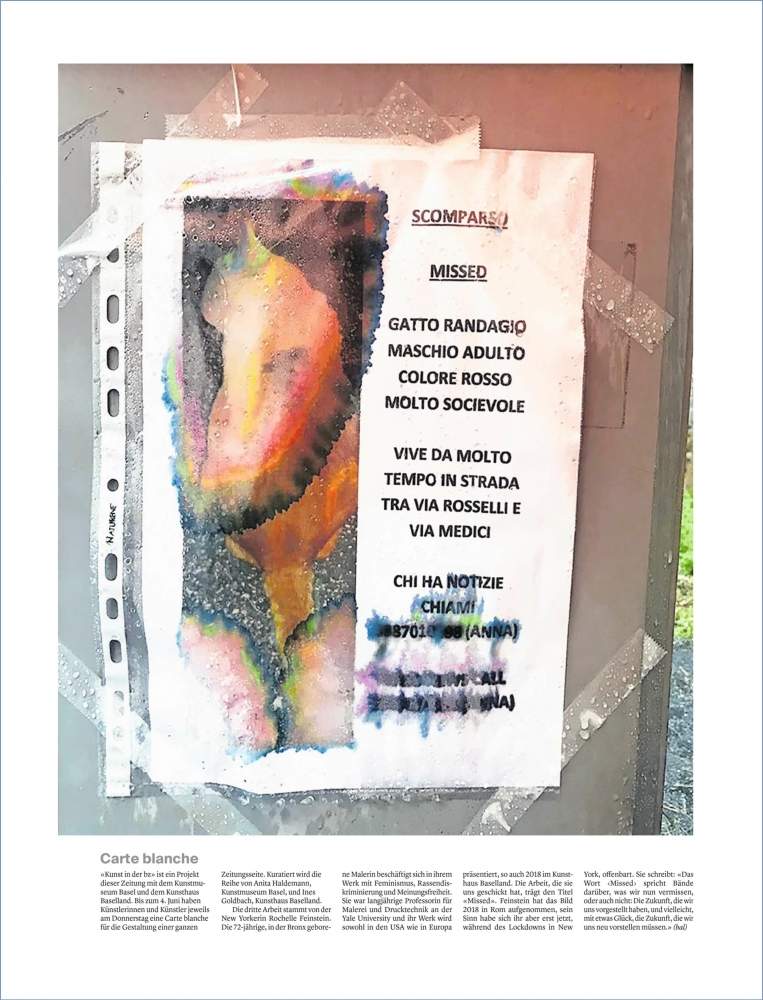 As part of its new series "Kunst in der BZ," Kunsthaus Baselland invited Rochelle Feinstein to contribute a full page artwork to the Basellandschaftliche Zeitung newspaper.

I haven’t been in my studio for 7 weeks, yet I’ve been thinking about this image since 2018, when I took the photo in Rome. I’m working solely with the 7 colors of the prism; of rainbows: red, orange, yellow, green, blue, indigo, violet, colors used for digital mapping, ubiquitous emojis, rainbow flags, etc. This limited-yet-familiar palette saturates my works in different mediums/media. I was moved by the sentiment in “Missed” as much as the rain-soaked inks obscuring the subject of this longing. The image came with meaning, yet for 2 years I’d been unable to find a broader context for that meaning. I didn’t know what to do with it, but it lingered. As we endure and adapt to the pandemic, I returned to the photograph, its “meaning” now so apparent to me. What don’t we miss? The word MISSED speaks volumes to who; to what we miss; to the missed futures we imagined, and if fortunate, to the futures we have to re-imagine. 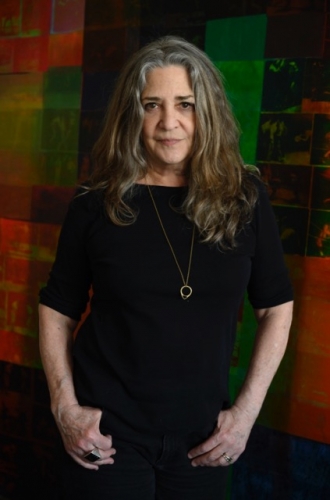 Born in 1947, Rochelle Feinstein is a longstanding and deeply respected member of the New York art community. Her work navigates the charged terrain of modernist painting with wry humor and sharp intelligence, unfolding across diverse and thematically interwoven bodies of work which incorporate painting, drawing, photography, printmaking, sculpture, video, and installation. In its social and autobiographical reference and attention to language and contemporary culture, Feinstein’s work raises trenchant questions about authorship and the role of the artist as public and private figure.

A major survey exhibition of Feinstein’s work originated at the Centre d’Art Contemporain, Geneva (2016), and subsequently traveled to Städtische Galerie im Lenbachhaus, Munich (2016), Kestnergesellschaft, Hanover (2017), and the Bronx Museum of the Arts (2018-2019). Other solo exhibitions have taken place at Kunsthaus Baselland (2018) and the Radcliffe Institute for Advanced Study, Harvard University (2012). Her work has been featured in the Whitney Biennial (2014) and in exhibitions at such venues as the Contemporary Art Museum St. Louis (2015); the American Academy of Arts and Letters, New York (2012); the Blanton Museum of Art, Austin (2010); and PS1, New York (2004).

Feinstein is Professor Emerita of Painting and Printmaking at Yale University (2017). Among her numerous accolades, she is a recent recipient of the prestigious Rome Prize Jules Guerin Fellowship in Visual Arts, American Academy in Rome (2017-2018). Her work is in museum collections including the Museum of Modern Art, New York; the Cleveland Museum of Art; the Pérez Art Museum, Miami; Städtische Galerie im Lenbachhaus, Munich; and Amorepacific Museum of Art, Seoul.