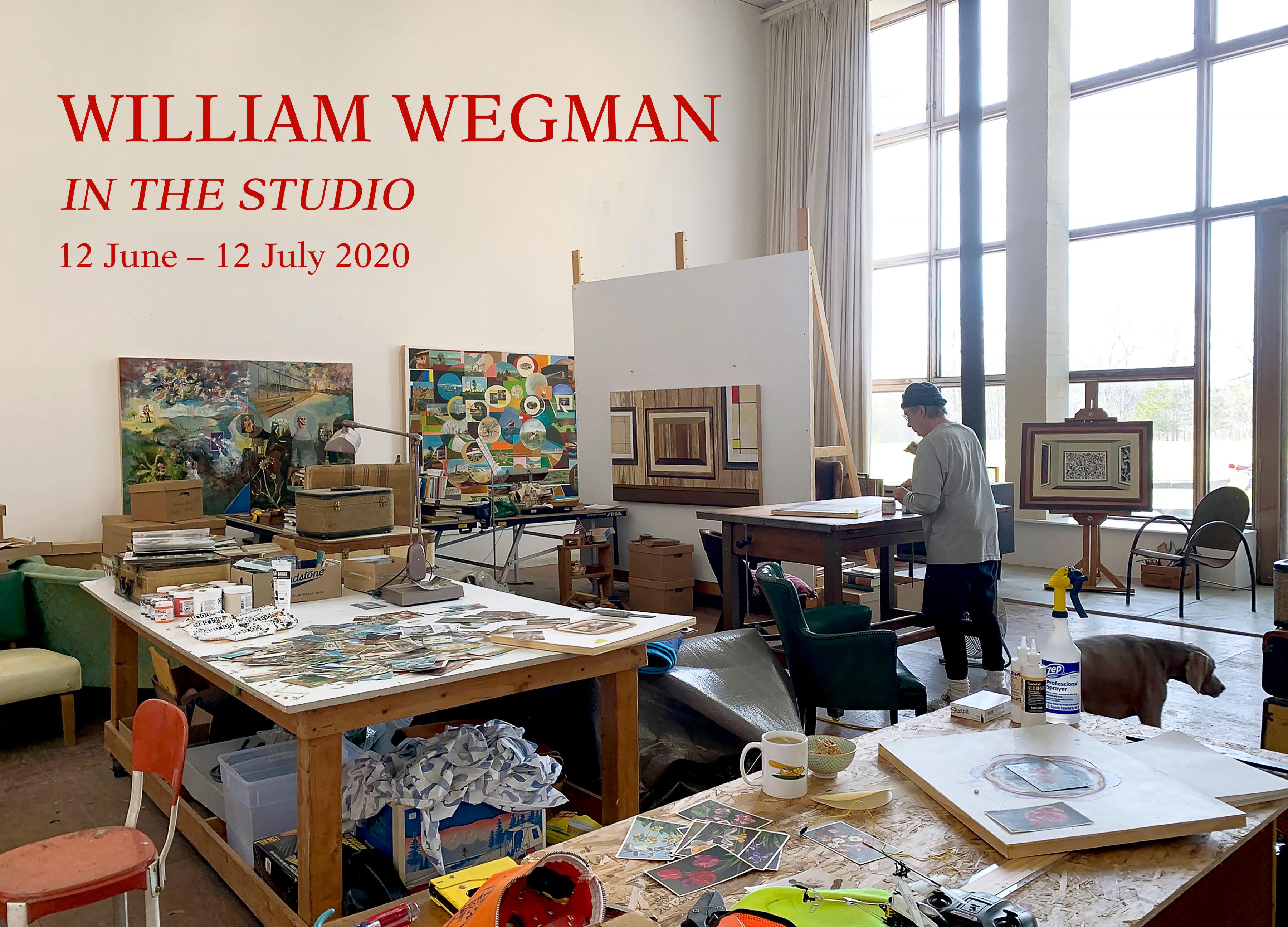 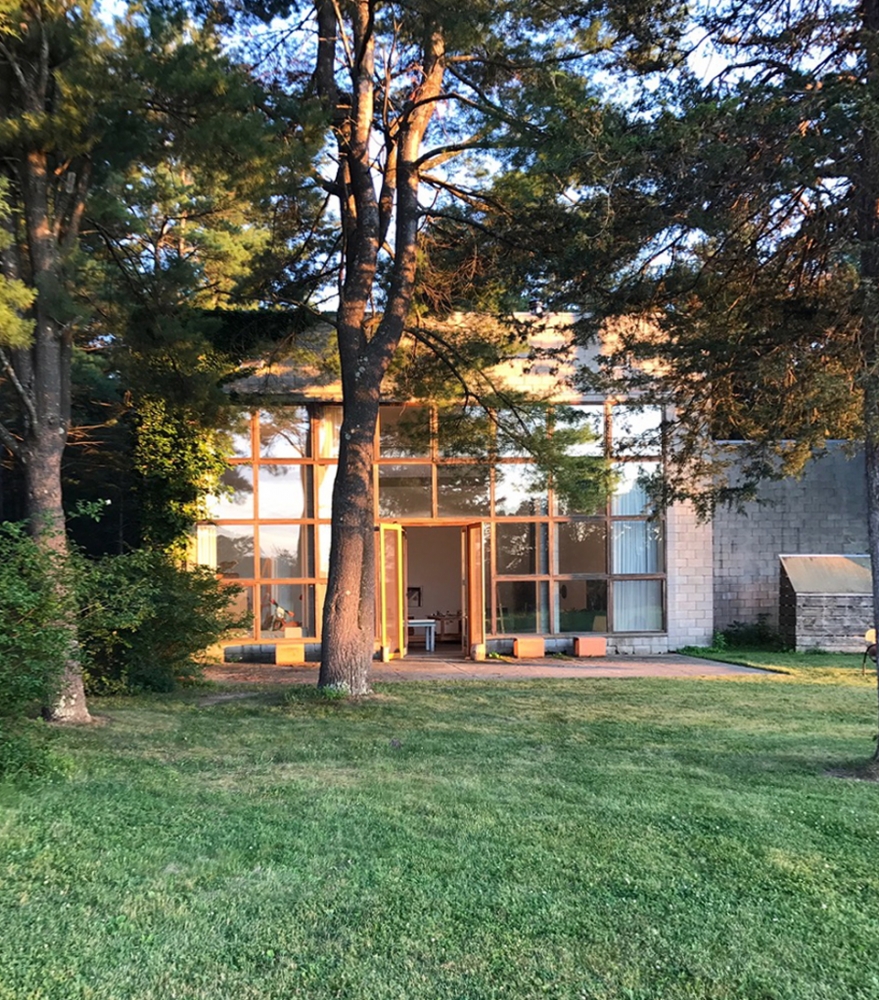 Sperone Westwater is pleased to present William Wegman: In the Studio, an online exhibition of new paintings made at the artist’s studio over the past three months. Speaking about his process, Wegman explained:

"I have a lot of postcards.  Suitcases filled with them.  Friends give them to me, artists, my sister, people who inherit them, people who collect them for years and then don’t know what to do with them.  Some are pretty and others are not.  There are divided cards, pictures within pictures, cards with words, cards that are terribly designed and others notable for their lack of design.  There is variety!

Since the early 90s, postcards have found their way into my paintings. The cards that I use determine the direction of the painting, suggesting style and scale and the problem of how, for instance, a Madonna Inn postcard from the 70s could possibly connect to a postcard of General Grant’s bedroom becomes an interesting problem for me.  The postcards lead me in directions I could not have imagined.

Recently I have been working on some paintings without postcards.  My inspiration: television, Mondrian, frames, wood paneling, Ben Nicholson or one of my typing paper pencil drawings from the early 70s, re-envisioned, faux-matted and framed in oil paint." 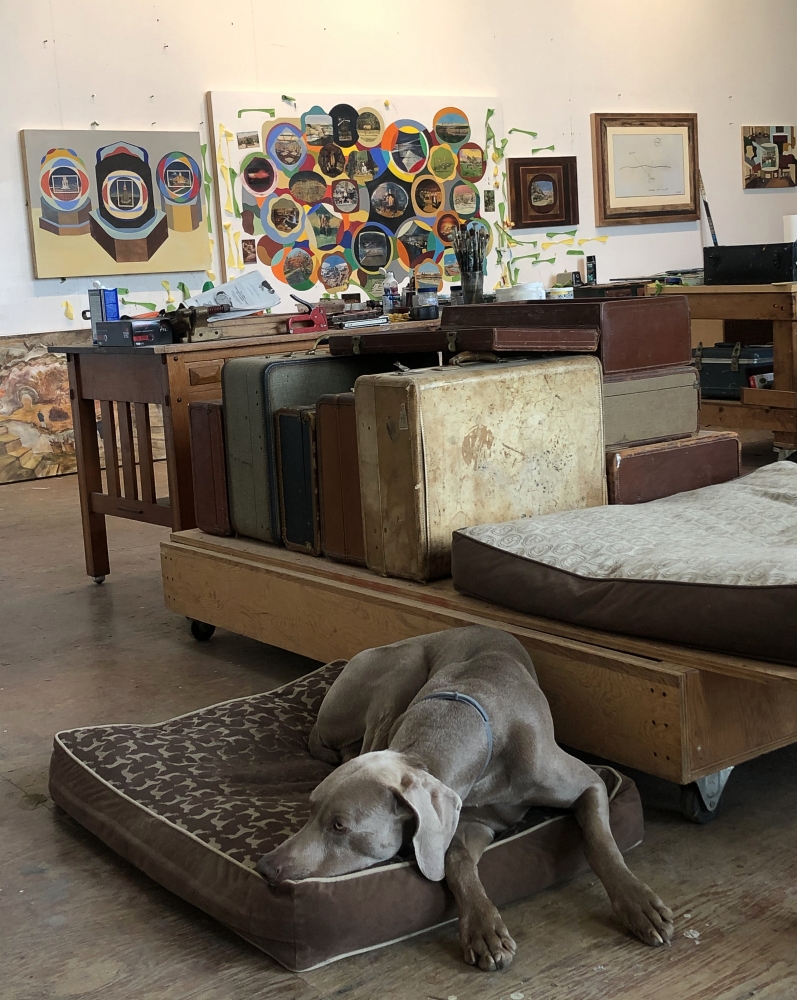 Photo from the artist's studio, May 2020

Wegman's postcard paintings merge found imagery with imagination. Extending the subject matter of each card in oil pant, he constructs imagined scenes that range from intimate interiors to cosmic vistas. Each painting is spatially complex, allowing cultures and epochs to collide. The artist’s hand is always made evident through humor and improvisation. In Interior Exposition, living and dining spaces are extended into playful, scrawling loops. Fireplaced plays with the same subject of the living room, placing postcards of fireplaces into vignetted rooms, sectioned off with abstract geometric shapes that confuse foreground and background. TV Tone (Orange) turns a vintage television into the screen of a lookalike retro monitor and Trophy Town transforms city landmarks like fountains and buildings into sturdy, skyscraper-like figurines on painted pedestals. In Wood Work, Wegman repaints other paintings by Piet Mondrian, although he says, “I’m not that interested in capturing these works of art by other artists and calling them mine. I like to find a home for them, and I’m happy playing around with them. They’re reproductions, not the originals.”

These works exhibit an unabashed sense of play and showcase the artist as a collector, populating his pictures with an enormous range of imagery. Wegman continues to challenge himself to create a scaffolding for things that do not seem to go together, speaking to his long engagement with narrative, perspective, art history, humor, and pop culture in art.

Wegman's use of domestic props or personal items found at home has long been evident in his practice, dating back to the 1970s when he lived and worked in Southern California for a few years. Closely associated with Los Angeles artists such as Ed Ruscha, John Baldessari, Bruce Nauman, and Allen Ruppersberg, Wegman and his peers shared both a sense of irreverence towards conceptual art and maybe even more importantly, a sense of humor. Wegman turned to video, drawing, and photography, using each medium in ironic ways that poked fun at the academic, East Coast version of conceptualism, deflating the pretensions of Conceptual Art at a time when it was being codified and institutionalized.

Staging short vignettes, Wegman relied on everyday items for props and subjects. His key early collaborator for most of these works was his pet Weimaraner, Man Ray, who enthusiastically participates. For many, expectations are reversed, and puns and homonyms are pursued to absurd conclusions. Other videos and photographs explored sameness vs. difference, where the artist compares superficially identical items, twins, or scenes, to emphasize the enormous subtle differences that are naturally present. 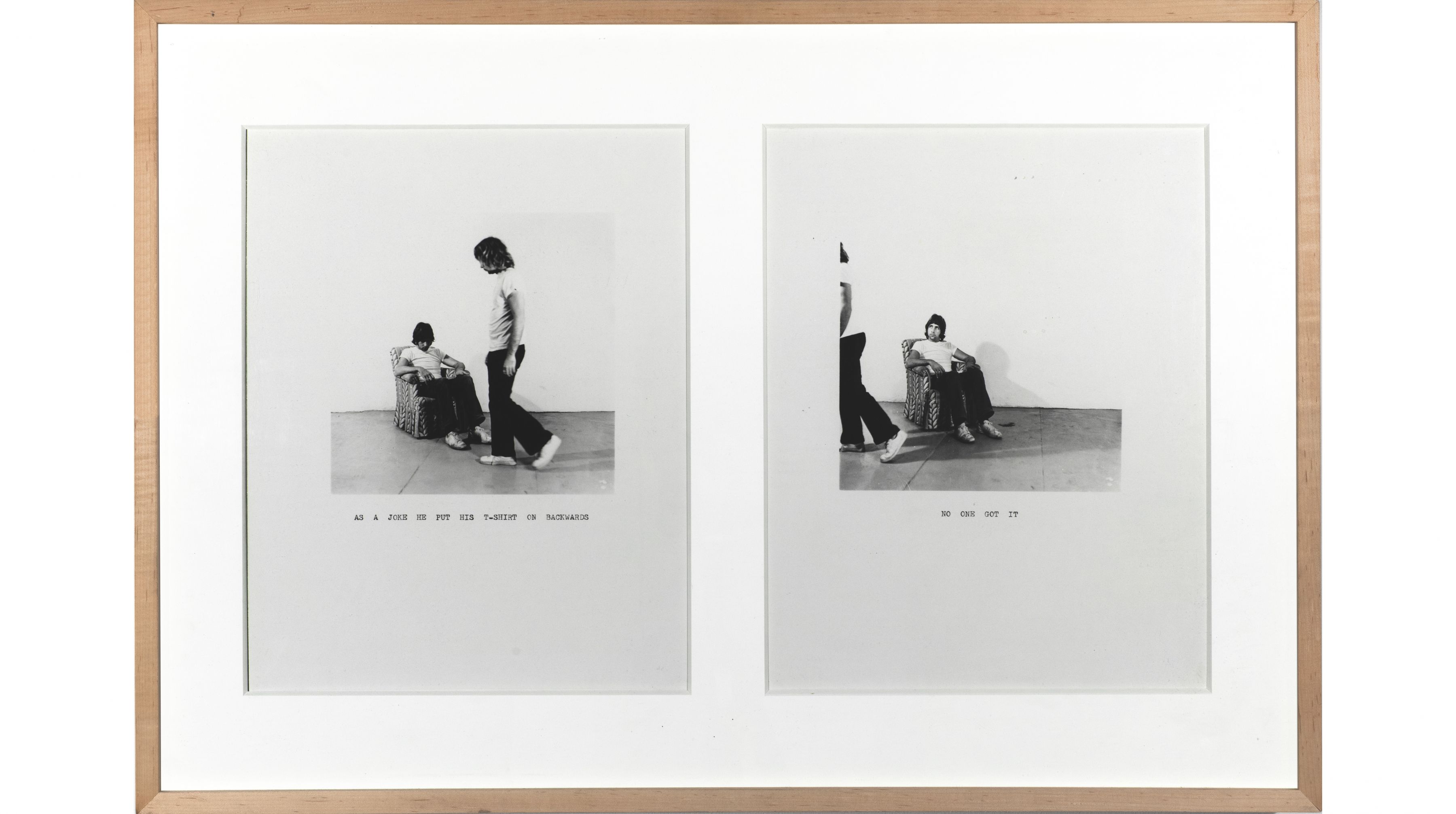 Speaking about a later reel, Wegman explained, "When I’m painting, my dogs have a disconcerting way of questioning me about my suspect use of time and space.  'What’s going on with the wall?' That is the subject of Installed Guitar, a piece from 1990 with Batty, my most often photographed dog."

Born in Holyoke, Massachusetts, in 1943, William Wegman received a BFA from the Massachusetts College of Art, Boston and an MFA from the University of Illinois, Urbana-Champaign. His work has been exhibited extensively in both the United States and abroad, including solo exhibitions at the Walker Art Center, Minneapolis (1982); San Francisco Museum of Modern Art (1988); Whitney Museum of American Art (1992); Museum of Fine Arts, Boston (2001); and The Art Gallery of Ontario, Toronto (2002). The retrospective “William Wegman: Funney/Strange” was held at the Brooklyn Museum, and traveled to the Smithsonian American Art Museum, Washington, D.C.; the Norton Museum of Art, Palm Beach; the Addison Gallery of American Art, Andover; and Wexner Center for the Arts, Columbus (2006-07). The Bowdoin College Museum of Art presented “William Wegman: Hello Nature,” a major survey of over 100 nature-related works by the artist in various media (2012), which traveled to Artipelag, Värmdö, Stockholm, Sweden (2013). “William Wegman: Improved Photographs,” a survey exhibition, was held at the Jepson Center, Telfair Museums, Savannah, GA (2017). In 2018, the Metropolitan Museum of Art organized “Before/On/After: William Wegman and California Conceptualism,” an exhibition of the early 70s work of Wegman and his fellow Los Angeles artists. "William Wegman: Being Human,” a traveling exhibition of his large-format Polaroids, is scheduled to open at Fotomuseum Den Haag in September 2020. Wegman’s work is in many important public collections including Albright-Knox Art Gallery, Buffalo; Centre Pompidou, Paris; Los Angeles County Museum of Art; The Metropolitan Museum of Art, New York; The Museum of Modern Art, New York; San Francisco Museum of Modern Art; Walker Art Center, Minneapolis; Whitney Museum of American Art, New York. Wegman had a solo show at 121 Greene Street, an alternative space in SoHo, in 1990 and solo exhibitions at Sperone Westwater in 1992, 2003, 2006, 2012, 2016, and 2017.

Photos of the artist's Weimaraners, Flo and Topper. May 2020.